I saw us turning into ashes

and demolished doors leading to nowhere.

Today Ned was home wholeday. I was hoping he would try to spend a few minutes with me. I was waiting for him to look at me at least once but guessed the stars of my sky have faded. It was a long mute day till 12:30 a.m. Ned put his only dearest phone for charging and his hands glided on my breast, his lips on mine like an unwanted signature but only for formality, he pushed me down for which I wasn’t ready. I was full of deadly emotions to rest my head on his chest for a while, hugging him a little longer. Was that too deadly? That he can’t afford it! Anyway the routine sex act was done within ten minutes which was also almost mute. I didn’t know what made me to think that we would sleep together talking about silly things. In no time his eyes got locked on the phone screen and his hands were holding it carefully. I found no place for me in his arms. There were no stars in the sky, my thoughts are falling in places now, seems all the stars were dying. These mute hours do unbearable noise.

It was one of the difficult situations when I moved to a new house. From the outside it didn’t look much old, interior was decorated by spider web. Owner informed me that someone would come to clean, perhaps I reached early. Previous tenant might have forgotten to carry their almirah. Inside there was a torn notebook with yellow pages. The words fragmented moments were written with red ink on top. My curious fingers turned the first page.

Dear notebook, I’m lucky that I got you in life who can take all my happiness and pain anytime. Ned barely talks to me. I have been looking at his calm face, busy eyes and his occupied hands. I often wander to reminiscences of past years when we listened to each others’ unspoken words. Now it’s all quiet. Our heart stopped singing song, we don’t touch each others’ skin anymore except the sex seconds. We don’t give a damn to each others’ feelings anymore.

{Kindly don’t use for plagiarism}

We were walking so close and my skin could feel the majestic aurora of his skin. The world around me was moving fast, my body was so slow, as much I tried to walk fast, the surrounding was running like someone was forwarding the whole scene. My inside was restless as the situation seemed so unreal. He had a sheer smile on his face, serene.

Where are we heading? Who are you and what is Amor?_ I stopped in middle of the flyover.

Amor, we are going home. Just come with me. I promise you’ll get all the answers. _ He held my hands and we entered a circle with colourful aurora.

We weren’t on the flyover, it took seconds only and we were in an extraordinary place. It was hard to differentiate whether it was real or I was in dream. There were two moons in the sky, bigger than earth’s moon, shining brighter and closer to land. There were doors only but no house. We stepped through one of the doors, one rose plant was there next to the door with two red roses. I heard someone saying welcome home Amor. I shrugged looking around. No one was there but I saw him looking at me. He pointed to the roses. Roses could speak here. Where was I?

Burning candles of the chandelier, open windows, a frozen stream, a floor of dandelions, a wooden cupboard which door was made of chinar leaves and a bed of petals. He opened the cupboard and asked me to look inside. I was reluctant but eager to know. I saw mine and his different lives from different times in the earth and how we ended our lives many times in search of purpose to be born as humans. Now I knew I arrived my destination, ending of my journey to search the purpose of my existence. We were for eachother from the moment the universe had come to life. We were one single particle, we were parted in the process of evolution. I embraced him and we became one. I was him and he was me.

I wanted to die and I wasn’t joking. I wanted not because I was sad. I wanted because I was unable to fit with the system of the world, this world wasn’t my home. I often had a strong feel that I was something different and mistakenly sent to the earth. All I saw unfamiliar creatures around me with impenetrable system. I was trying hard to understand them but it never made any sense till I met Gem. After passing twenty seven years of human life, eventually I found Gem the evening when I was about to jump from the flyover. City lights were stubborn, they surpassed darkness every night. Sparkling silk cars were running under the flyover and I was standing there with no second thought to go back to life. I wanted to explore after death, I might go to my destination. It was stunningly amazing, just a few seconds away from meeting death face to face. I took my first step in air with my firm left foot then I let my right foot to follow the left. There was no fear, my body was falling down and more down and I was happy. Then I felt someone holding my hand in air. There was someone extraordinarily different from this world. I had never seen such being in my past twenty seven years of living. Now I was stuck between life and death and I experienced something unearthly. He pulled me back to the flyover. His hair was sky-blue, a pair of golden eyes and a purplish aurora around him.

“Amor” _ I didn’t understand what he said but his voice was wrapped in honey.

Caution_ Do not use for plagiarism

Nightmares and devils
play see-saw inside my head,
when I see through the window at dawn,
I don’t see any sun.

My legs could feel the moisture of grasses,

morning would invite their banishment.

And I woke up every morning

route to my origin. 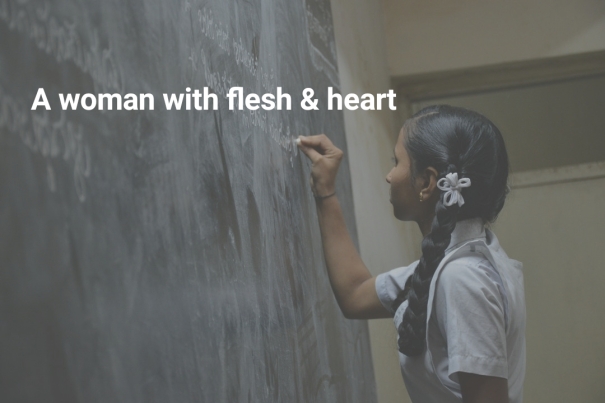 Shelly was raised in a middle class family in a small town in India. A small town but with many traditions. The people followed the traditions like they were direct command from God. They could sacrifice themselves to nurture the traditions. Shelly was student of eighth standard, walking everyday one kilometre to her school. Some of the girls were going on bicycle to school except a few and Shelly was among a few. When coming back from school in the afternoon, her legs were paining, her steps were weak. One evening, she asked her mother for bicycle, she was thinking her mother will agree immediately. Her mother told her that good girls don’t ride bicycle, riding is for boys. Shelly requested much, tried best to make her understand that how her legs were paining when coming back from school. Finally she was riding bicycle to her school after one month. Shelly was scared all the time because she couldn’t find anyone similar to her. She had an alien feeling that she didn’t belong to that place and to those folks. Her favourite day was sunday cause that day she could live her secret. A secret _ a newborn writer, she composed poems and weaved stories on last pages of her rough copies. She wrote only on sunday in her study room and her mother assumed that she was studying school lessons. Her mother didn’t appreciate her writing. She was afraid to get judged and criticized. She lived a decade as a secret writer with a fear not to killed by the traditions.

Shall we put the tradition first or our own choice of living?

Link to A woman with flesh & heart @1

WOMAN _ It’s difficult to understand them, some says. It works like an age long myth. Indubitably, a woman is full of emotions, she is gifted with patience, kindness and extra more ability of adjustment. She can categories each emotion for each criteria of different relations. Inspite of all these, most of the times, she is treated as a tool to make others’ life comfortable. Of course, we’re wise and educated enough, living in a system which provides equality for men and women. But is it so?

Sometime I look around my surrounding and I see many faded faces losing their own identity. Their eyes are asking only question_

Till when I have to live for others? 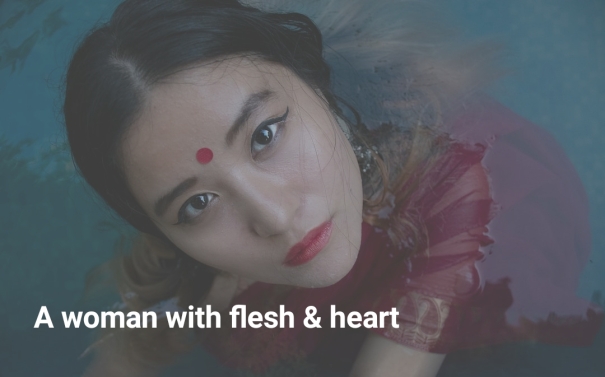 Beginning is always chaotic
like the uncertain steps
in bottom of the river,
Timid hearts are everywhere
stitching tales of excuse,
But you’re the flame itself
you ignite
you burn
you rise
you live
till you die.